If you are lucky enough to live where buckeye trees (or horse chestnut trees) thrive, then you probably are already in love with the fat, smooth, brown nuts that they drop in September. 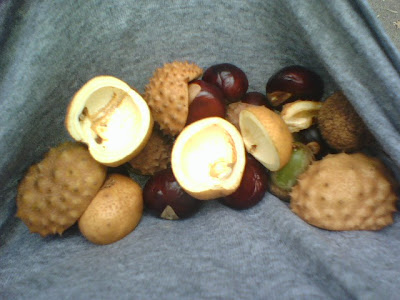 Here is a game you can play with buckeyes (or conkers, as they're called in England)...we learned it from the book All Year Round

. Its so easy that a bright 3 year old could join in, so fun that grandparents will want to try, too. Extra bonus: we count this as math in our kindergarten! 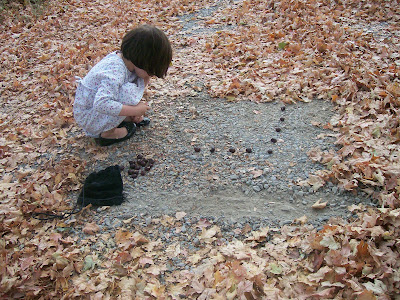 The 3 necessary ingredients are:
- buckeyes (15 of them)
- a stone to toss at the buckeyes (or you could use another buckeye)
- a flat bit of ground to play on
We cleared a patch of our gravel driveway to play This is a very challenging surface, but we've also played on pavement, hard dirt, sidewalk, and indoor wood floors :) 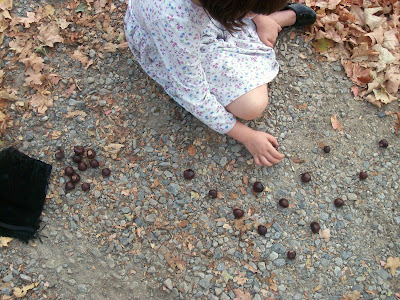 Here's where some of the math comes in. You set up the game by placing the buckeyes in a grid ... there are five rows. The first row has one nut, the second two, the third three, the fourth four, and the fifth five. They should all be placed equidistant from each other. Of course, I don't say all this to my kindergartener, I just do it and she imitates me. After a few games she was able to set this up herself. 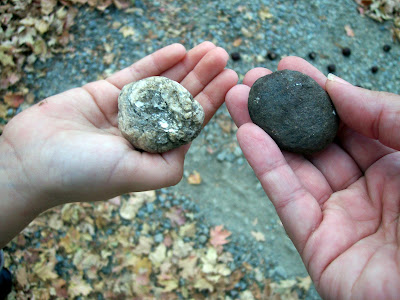 Get your shooters ready! 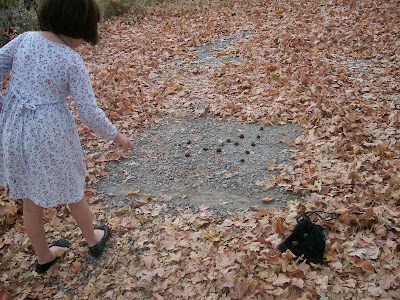 Take turns tossing your shooter from behind a line...determine where your line should be based on the age/skill of the players. The goal is to touch the buckeyes with your shooter...if you are really good, you can skim your shooter along the ground and upset many buckeyes in one go! After your shot, you collect the nuts that your shooter touched and put them in your stash. 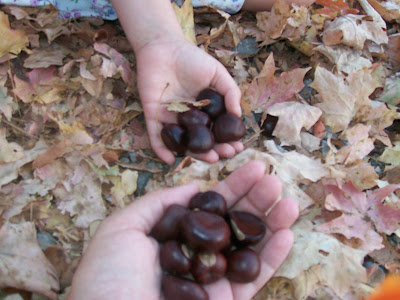 The game ends when the very last nut has been hit. If you are into competition, count up your nuts (more math). The player with the most buckeyes wins!
Posted by cypress at 6:33 PM