It ain't pretty, but it sure is good! 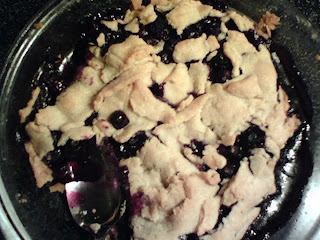 That mess up there is what happens when I fulfill a loved one's whim for Blueberry Pie in the middle of a snowday and crank it out in 40 minutes flat. It may not look like the cover of Gourmet, but it sure tasted like a little bit of sweet summertime in a dish. 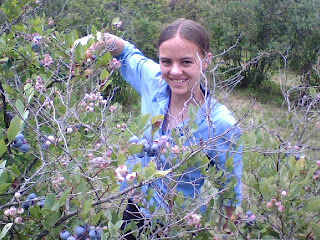 (Naya, back in the summertime, plucking a bucket of blueberries )

I like my pie rustic, anyway. (No one has ever confused any pie of mine for a store-bought one! Not sure if there is a compliment in that....) Most often, instead of a proper bottom crust/top crust arrangement, I roll out one larger crust, lay it in the pan, put in the fruit, then fold the edges of the crust over the top. One may argue that this is not technically pie...maybe it is crumble, or cobbler, or buckle, betty, boopsy...whatever. It tastes like pie and, so far, I'm getting away with calling it that.

Mix milk and oil together.
Make a well in the flour and pour liquids into it.
Stir barely enough to blend.
Roll out between two sheets of waxed paper.
Chill (still between waxed paper) until needed.

Oven on at 375.
Lay crust in a pie dish with a generous amount of it extending beyond the edge of dish.
Toss berries, vanilla, cinnamon, and sugar together in a bowl
Dump into crust.
Dot with butter.
Fold edges of crust over top of fruit.
(We sprinkled the top with cane sugar here for extra bling)
Bake for about 30 minutes (or until golden and bubbly) 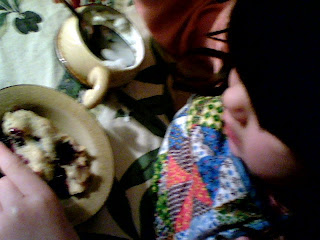 Toucie ate it with snowcream ....summer and winter all at once.
Posted by cypress at 12:43 PM